A group of investors, among them a rear admiral who served 30 years in the U.S. Navy, is investing $180 million to build 15 private, indoor pickleball clubs in Florida. The first location for the venture – known as The Pickleball Club – will open this December near Sarasota’s Lakewood Ranch, one of the nation’s top-selling master planned communities. Additional locations are in planning or the land acquisition stage for Bonita Springs, Port St. Lucie, Fort Myers, Venice and The Villages in Sumter County, with Florida being the prime target, at least to start.

There are other smaller, indoor concepts for the booming sport of pickleball, but nothing yet to this extent. The Pickleball Club is essentially embracing golf’s country club concept, providing a private venue that’s as much focused on the atmosphere and amenities as the central activity itself.

“I really didn’t want to build just a recreational facility,” says Brian McCarthy, who in addition to his service in the Navy has a Harvard MBA and is a commercial real estate developer, with about $500 million in projects. “A lot of people focused on this just being indoor pickleball. And I say, ‘Not really, this is a private club with pickleball as its base.’” 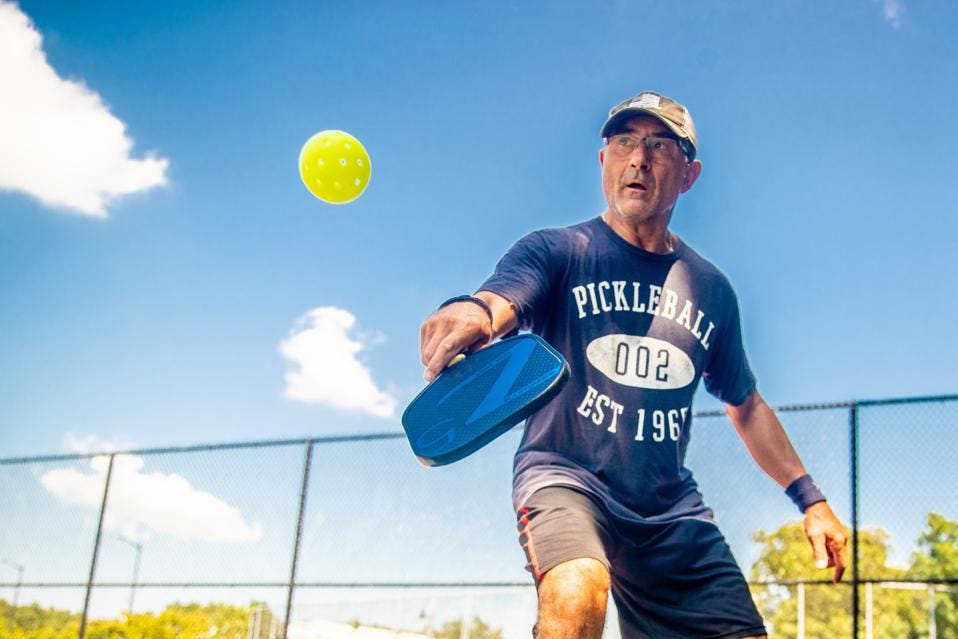 Each facility, starting with The Pickleball Club – Lakewood Ranch, will have 12 to 14 indoor pickleball courts and several outdoor courts with championship surfaces, plus full locker rooms, an upscale café and a pro shop (named Dinks after a common pickleball term). As to why the majority of courts are indoors, the ownership group surveyed 4,000 Sarasota residents about what they’d most want to see in a pickleball facility and the No. 1 answer, by far, was indoor courts to get away from the afternoon downpours and often unbearable humidity during summer months in the Sunshine state.

Over $1 million in electronics and technology will be in place at the state-of-the-art venues, including digital scoreboards for events and on-court cameras that record all day long in case members want to watch or review their play later via smartphone or computer. High-definition PlaySight technology will allow the club’s professional staff to integrate real-time video into lessons and clinics, while members can reserve courts and coordinate matches through a new reservation software system, helping provide structure and reduce wait times not unlike a tee-time system in golf.

McCarthy, the co-founder and CEO, says The Pickleball Club is primarily focused socialization, building relationships and pursuing a healthy lifestyle.

“The sport is very social,” he said. “So, there’s lots of seating at the café. We also built a second mezzanine level that overlooks the courts that has a bar, large screen TV, cornhole and other amenities. We’re really focused on the member experience. That’s what it’s all about. Having a private club allows us to do that. It gives us a lot of flexibility to go out and improve and expand based on what the membership wants. That’s great because you don’t have to go to a committee.”

Membership buy-in is $1,000, with another $1,200 annually in dues – or $100 per month. At this stage, little has been done to actively pursue membership growth and there are already over 1,800 people on the waiting list for the Lakewood Ranch location.

“We haven’t set that upper limit, but we can’t accommodate that (demand),” said McCarthy, who is teaming on the venture with his wife Valerie and business partner Matthew Gordon, who is co-founder and chief financial officer. “We anticipate (the limit) is something over 1,000 members. We’re going to be open from 6 in the morning until 10 or 11 p.m., so we can channel people to different time slots. We’re going to have leagues, ladders, tournaments, all kinds of activities for members to get involved.”

The state boasts more golf courses than any other in the nation, including many private golf clubs that themselves have added pickleball courts in recent years as the sport’s popularity has skyrocketed. Over the last two years alone, the number of pickleball players in the U.S. has jumped by more than 39%, according to the Sports & Fitness Industry Association. And while popular with retirees, which Florida certainly has more than its share of, pickleball’s participant base spans the full age spectrum, not unlike golf.

“Florida is the most valuable market in pickleball, and we plan on being the market leader during this all-important land-grab phase of the industry, given the tremendous demand for indoor court space,” said Gordon.

With each facility costing about $10 million to $14 million to build from the ground up, after the land itself is purchased, the entrepreneurs behind The Pickleball Club are continuing to raise capital and have seen strong demand from the private investment community. The company currently has 47 shareholders and has raised almost $5 million in equity over the past six months, with more on the way.

“Our interest is in operating these locations, we’re not franchising them. They’re all corporate owned,” said McCarthy.

“Our first objective is to build 15 in Florida, but we think it could hold 20. The way I see it, it’s not only exciting to play (pickleball), but it’s a fantastic business opportunity. This is a concept that was unique and appropriately addressed the pickleball market.”